Why mycorrhizal fungi are vital for garden health 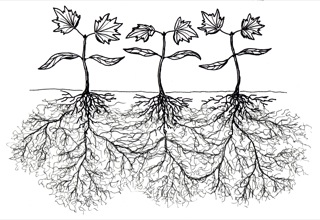 For example, many nutrients - especially phosphorus and some micronutrients - exist in rock formations that are difficult for plants to dissolve, and so plants have engaged the services of special types of fungi.

These fungi, called mycorrhizal fungi, anchor themselves in plant roots and from there extend their long strands of mycelium into the surrounding soil. Their powerful digestive enzymes break down these rocks to harvest the nutrients, which they then trade with the plants in exchange for carbohydrates.

Mycorrhizal fungi also assist the plant with water uptake. The fungal network increases the root area - the water absorption area - of the plant many times, and so effectively renders the plant more “drought tolerant”.

In addition, the dense fungal strands act as the root’s first line of defense in a world teeming with microbes.

Some species of mycorrhizal fungi literally wrap themselves around the roots, completely protecting them from potential predators.

And here we find that mycorrhizal fungi also work as messengers between plants, even transferring nutrients from one plant to another. So a healthy garden becomes like a single organism, acting in unison, a life form in its own right.

The relationships between plants and nitrogen fixing bacteria, and plants and mycorrhizal fungi, are only two examples of the many trade agreements plants have with other organisms in the soil.

The area in the immediate vicinity of plant roots is alive with thousands of species, which feed on the carbon compounds excreted by plants and in turn produce substances that the plants require, such as vitamins, amino acids, enzymes and growth hormones.

Plants may be able to photosynthesize, but they also absorb a significant amount of “processed” organic carbon from the soil.

Sometimes it’s cheaper to bring in pre-assembled parts than to manufacture everything from scratch - a concept we are well familiar with in our human economy.

The countless organisms in Nature - and in our garden - thrive because they make a valuable contribution to the whole.

We have only just begun to understand the complexity of this interconnected web of life. It would serve us well to recognize the inherent intelligence in Nature, and to work with it rather than trying to subject it to our limited imagination.

We go much deeper into this topic in our online course, which you can discover here:

It was great to hear about dowsing, paramagnetism, biological transmutation, and plant consciousness, which are barely talked of and generally unaccepted by the mainstream. It is truly miraculous how the soil food web functions in symbiosis with plants. I find it endlessly fascinating, and now realize how much respect the soil deserves. So thank-you! This has been a very valuable learning experience!
Ian